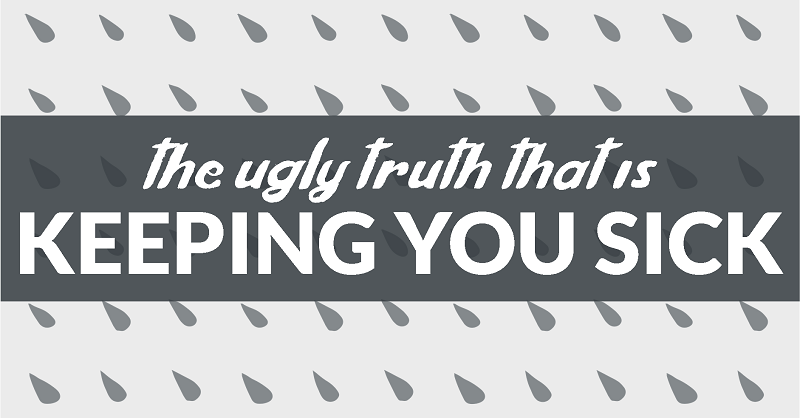 There’s an ugly truth that lies at the very root of many health issues. This truth is so powerful that it can sabotage anybody who lets it – it can affect people from all walks of life, regardless of age, gender, race/ethnicity, education, or background. This truth can keep people stuck in a seemingly endless loop of pain and frustration. This truth can even drive away friends and loved ones. Do you know what it is?

This may sound harsh, or even unbelievable, but I want you to know that this is coming from a place of compassion and understanding – the ugly truth is: many people will never get better because they haven’t made the decision to get better.

(And I’m mainly referring to illnesses with a lifestyle component here.)

This statement may invoke anger to some (hell… to many). If you’re angered by this statement, you might fall within the group that has not (yet) decided to get better. If, on the other hand, you understand this statement and agree with it, you’re probably ready to embrace getting well or you’ve already taken steps to overcome your illness (if that’s the case, congrats!).

Why you may be choosing NOT to get well

This may sound crazy, but, either consciously or subconsciously, you may be CHOOSING to stay ill. Why? Maybe the health condition is a way to get attention or sympathy. Maybe the illness is a way to avoid things that you don’t want to deal with. Maybe you found some comradery from others who share similar struggles. Maybe the very idea of making changes to diet and lifestyle just sounds too hard. Maybe you’re receiving government assistance because your health condition impacts your ability to work (and the idea of giving up that assistance is completely terrifying).

Whatever the reason, before you’re able to truly start getting well, you have to decide just how badly you want it.

I’ve been on both ends of the equation

This is hard to admit, but I used to act like a victim. I used to think that the health issues that I was dealing with happened TO me… but, in reality, they happened BECAUSE of me. Part of me liked the attention that I got, but mostly I liked the excuse of being able to miss work because of my health.

At the time, I was working at a place that I dreaded going to most days. I would work myself up into a ball of anxiety, then give myself migraines at least a couple times a month. I knew that there were certain foods that would make me feel worse, but that didn’t stop me from eating them. It wasn’t until I made the decision to leave my job that I started to get better (in fact, I’ve probably only had 1 or 2 migraines since I left that job in 2012). This just shows how much of an impact stress can have on health; I also made it a point to avoid the dietary triggers that I knew about, since I no longer needed a reason to hide.

On the flipside, my father-in-law’s health has taken a pretty steep decline over the past year. Knowing what I know about health, I offered to help him with his eating to see if taking the dietary approach early on could be enough to prevent his health from getting worse. He had a lot of excuses. “I can’t afford healthy food.” “I can’t afford special testing.” “I don’t think diet will help.” In reality, what he was saying was that he didn’t want to change. He also didn’t want to admit to himself that his lifestyle and diet were killing him. Unfortunately, he continued down the same path he’s been on for his entire adult life, and he’s now in a major health crisis which may end up taking his life.

It’s tough to see loved ones go down a path that you know will end up hurting them. It’s even tougher when you realize that YOU can’t help them unless they want to be helped. They almost have to have this divine moment with themselves where they realize that if they truly want to get better, they have to fight for it. It’s do or die. They have to decide that they will do whatever it takes – no excuses.

Why am I telling you any of this?

Whether it’s your health that’s in jeopardy or someone who’s close to you, know that the first step to improving health has to come from the desire to truly get better. Saying that you want to get better is completely different than taking action – if you’re not in a place where you want to get better on a deep level (and will do whatever it takes, without excuses), you will end up sabotaging any efforts that you do make. (This, by the way, is why I have a conversation with each person seeking out my services before I actually take them on as a client.)

Health has to start with mindset. After you’ve made the decision to get better, everything else is cake in comparison.

What do you think –

Have you been through a health crisis where your biggest hurdle was your mindset?

Have you seen loved ones sabotage their own health?

I’d love to hear about your experiences in the comments below!

Until next time,
Amanda