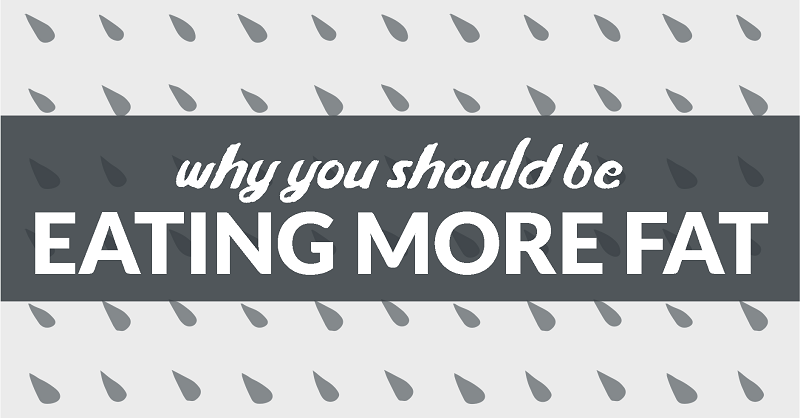 For decades, there’s pretty much been an all-out war on fat. Proponents of the crusade touted low-fat diets as being a way to lose weight and avoid those high cholesterol levels and those pesky heart problems. Funny thing is, removing fat from the diet doesn’t actually accomplish any of these things (and can actually make matters worse). Unfortunately, a lot of health professionals haven’t caught on to this quite yet (booo)… and it’ll probably be a few more decades before nutrition rec’s from the government ever get updated to reflect some of the more recent findings with fat. Nevertheless, here’s some of the stuff that you absolutely need to know about fat (and why you should stop avoiding it).

There’s soooo much more to fat than just calories.

One of the reasons the low-fat craze became super popular was because of the fact that fat has more energy (i.e. calories) per gram than protein or carbs. So, it was logical to think, “gee, if we remove the fat, people will eat less calories and lose weight!!” Unfortunately, here in the real world, it doesn’t quite work like that.

When food manufacturers made the move to reduce or remove the fat from their products, they had to replace that fat with something so their products would still be pleasant to eat. In a lot of cases, fat was replaced with sugar/refined carbs or some other mish-mash of man-made chemicals.

Unfortunately, sugar and refined carbs are not as sustaining as fat is, so you usually end up eating more food to actually feel full. What’s worse is that it causes your blood sugar levels to spike, then plummet, which usually causes you to crave more sugar/carbs. So, not only do you end up eating more per sitting, but you also eat more often! I’m sure the food manufacturers LOVE what this does for their bottom line. 😉

[If you really want to see the kind of impact that carbs have on your appetite, conduct a little experiment. Pick a day where you eat a high carb breakfast (like cereal, a bagel, etc.) – take note of how much you eat and how soon after breakfast your stomach starts rumbling (for bonus points, take note of your energy levels, too – you’ll probably find yourself leaning more on coffee, tea, or other caffeine-laden beverages when you start your day off with a high-carb meal). Next, choose a day where you eat primarily protein and fat for breakfast (like eggs, low-carb veggies sauteed in butter/oil, whole fat unsweetened Greek yogurt with almonds and berries, etc.) – keep track of the same info as the high-carb breakfast and compare your results.]

Fat plays nice with other nutrients.

Fat is actually needed for your body to use several different nutrients. Some of the well-known nutrients that require fat for absorption include vitamins A, D, E, and K, but some lesser talked about nutrients include carotenoids, such as beta-carotene, zeaxanthin, lutein, and lycopene.

Carotenoids basically act as antioxidants (they help reverse damage and can help prevent disease, such as cancer), though some types get used to make other nutrients in your body. Carotenoids are found in fruits and veggies, which makes a pretty good case for eating plant-based foods along with some form of fat in order to fully utilize all the goodness that those plant foods have to offer. (A bonus to adding fat to veggies is that it can make them taste even more delicious… and if they taste good, you’ll crave more of ’em.)

Not all fat is created equal.

Saturated fat has been vilified since the 1950s (based off of a flawed theory) because it was thought to contribute to heart disease. Recent research suggests that not only is saturated fat likely NOT at fault, but the other types of fats that we used to replace saturated fat with may very well be.

Inflammation, in case you’re not familiar, is at the root of many common health conditions, including heart disease. Omega-6 fatty acids are found in a lot of every day vegetable oils… the very oils that replaced saturated fat in cooking. (Whoops! Guess we would’ve been better off sticking with butter and lard all these years…) One of the reasons why saturated fat is so beneficial is that it remains pretty stable, especially during cooking (unlike the other types of fats) – instability causes problems.

Another group of fats worth mentioning are omega-3 fatty acids. Omega-3s, as you probably already know, are anti-inflammatory (i.e. protective) in nature. The biggest problems arise when the amount of omega-6s that you eat waaaay outnumber the amount of omega-3s (you need some omega-6s in your diet, but the amount shouldn’t be astronomically higher than the omega-3s). A good goal to shoot for is to get close to 4 times omega-6s than omega-3s – for reference, most people in the U.S. get roughly 20 times more omega-6s than omega-3s (and this huge imbalance is what causes issues).

There are different forms of omega-3s, but the main ones are DHA (docosahexaenoic acid), EPA (eicosapentaenoic acid), and ALA (alpha-linolenic acid). EPA and DHA come mainly from fish and animal sources, while plant foods mainly contain ALA.

Flaxseeds, chia seeds, walnuts, and other plant-based foods are often touted as being good sources of omega-3s, but the fact of the matter is, these plant sources (in ALA form) do not convert very well to forms that are well-utilized by the body. This conversion of ALA can be reduced when you have a diet high in omega-6s… OR if you lack sufficient nutrients that are needed to make the conversion (such as vitamins B3, B6, and C, and the minerals zinc and magnesium). This is not to say that you shouldn’t include plant-based sources of omega-3s… just be aware that you’re likely only getting a small amount from those sources.

Share on FacebookShare on TwitterSubscribe
Previous Post: « The tale of the inconsiderate egg (allergy response explained)
Next Post: How to make your period less sucky (or, why you should get a menstrual cup) »